Now we all know this shrub Nandina, Sacred Bamboo or Heavenly Bamboo. No 90’s yard was complete without it. Thankfully it has fallen drastically from favor in recent years. The newer  “improved” cultivars have failed to preform in the landscape. Nandina domestica is found in most landscaping mixes in yards, parks, hospital grounds, and other locations. Its bright red berries and contrasting dark green foliage add color and texture to landscapes. Some homeowners even deliberately plant Nandina to specifically to provide food for birds, including the Cedar Waxwing, American Robin, Northern Mockingbird, Eastern Bluebird and other birds that depend on winter fruits to survive. Their reason being Nandina berries last for months, attracting hungry birds when food is in short supply. This couldn’t be further from the truth, quite the opposite actually. Professional studies now show planting Nandina does not help birds, it actually harms them.

For instance, when dozens of Cedar Waxwings were found dead in a county in Georgia, researchers at a college of veterinary medicine, found the cause to be Nandina berries. Read their report. All the birds had intact Nandina berries in their crops. We discovered pictures of this online but felt they were too graphic to post in this blog. The poor birds had hemorrhaging in the heart, lungs, trachea, abdominal cavity and other organs. Bird deaths have also been reported in Houston and other parts of the country. 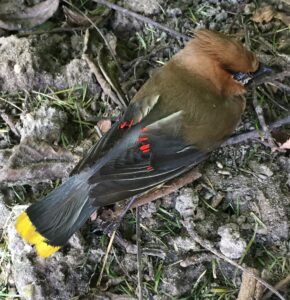 Come to find out Nandina berries contain cyanide  which is extremely poisonous to all animals. Sudden death may be the only sign of cyanide poisoning and death usually comes in minutes to an hour.

Furthermore, the U.S. Department of Agriculture (and most states at this point) classifies Nandina domestica as a noxious, non-native, invasive weed. Its origin is China and Japan. It has naturalized and invaded our national parks, widlife refuges,forests, parks, and other natural habitats throughout the U.S. Yet homeowners and commercial landscapers for some crazy reason are still pusing the sale of & planting this toxic species with thoughtless abandon.  Hydrogen cyanide is a painful and unnecessary way for birds to die. Nandina is also toxic to dogs, cats, and many other animals. 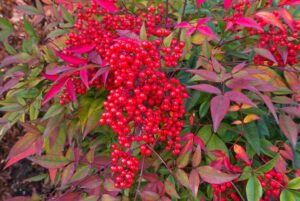 You can help by choosing to remove Nandina and plant natives in your yard. If you don’t want to rip out your Nandina, please at the very least prune the berry laden branches. We work with homeowners & landscape architects to find suitable subtitues for this plant and would be happy to consult with you.